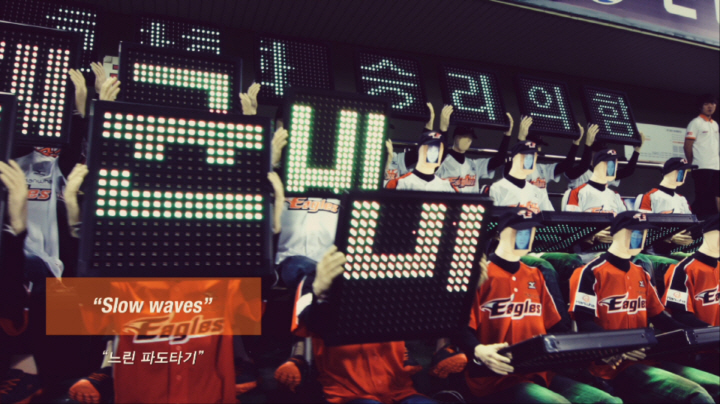 The Hanwha Eagles, Korea’s professional baseball club based in the city of Daejeon, has introduced mannequins called “Fan-bots” that would play the role of cheerleaders holding LED placards in the bleachers.

To be debuted in Daejeon Baseball Stadium, the home ballpark of the Eagles, the robot fans will sit in three rows and cheer up the game with LED messages appropriate to the moment.

In addition to the usual support messages like “Go Eagles!” or “I Love You, Eagles!” the robots wearing uniform shirts and jeans can relay text messages sent by the fans within the park or outside. They can also show the fan’s face on the screen, adding more fun to the game.

Kim Seung-bi, a 26-year-old hardcore Eagles fan, said, “I like the fact that I can send messages even when I am not in the ballpark or not watch the game on TV. I am proud of being an Eagles fan as the club has pioneered the world’s first all-digital cheerleading troops.”

Separately, the Hanwha Eagles has recently completed the renovation work on the ballpark including luxury suites called the “Hanwha Direct Zone” and expanded dugouts for the home team players as well as those of the away team. With these improvements, the baseball club is trying to get closer to the fans while offering better services for them.